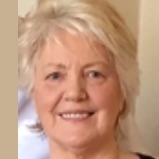 “I would recommend to anyone suffering with this debilitating condition to go for it and let the knowledge and training transform your life too...”

I had suffered with Glandular fever a year before I was married ( aged 23 in 1966) and a few years later I became so ill I collapsed and had to go and stay with my parents, for over a month I was bedridden and during the next lot of years visited almost every type of Dr to find out what was wrong with me. Many gave me drugs for nerves, insomnia and pain. Eventually I ended up in hospital with muscles seizures which I believe was a direct result of all the drugs. I went cold turkey and came off them all.

Eventually many years later I was finally diagnosed as suffering from ME/Fibromyalgia. I had learned over the years that when I got overtired or emotionally drained I would relapse and be back in bed. It was so empowering to understand why this happens and how to turn it around.

I had good years after the birth of my children, but then I would relapse. I was at a very low point when I learned about the Energy Excellence Course. I was reluctant at first and skeptical, but how glad I am that I made the decision to do it. The tools and explanations of everything just made so much sense.

I have nothing but praise for this course, the very first day blew my mind. The tools you are given in the course can only work if a commitment is made to use them.

My husband and daughter were delighted to see such a change in me within a very short time. I have benefited greatly from investing the time in myself and gained confidence that I will be able to enjoy a better quality of life, including my art and other ventures which I thought I were a thing of the past.

I would recommend to anyone suffering with this debilitating condition to go for it and let the knowledge and training transform your life too.

Thank you Amir to you and your team for your dedication and support.

This free course is for you if you are suffering from ME, CFS, Post Viral Fatigue, Fibromyalgia or Adrenal Fatigue... Hundreds of Fatigue Sufferers Have Taken This Mini Course